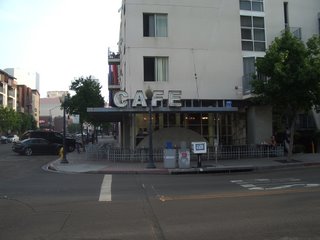 I spent two days in San Diego in late July for an accounting/recruiting/persuade-you-to-join-our-firm-event earlier this summer. As soon as I found out I was going, I did what the normal food obsessed would do and read every San Diego food blog from beginning to end. I had all my restaurants down. Man, was I excited. Until I discovered the firm would cover breakfast/lunch/dinner and have us locked in conference rooms all day. Oh pooh. Nonetheless, I “snuck” our early one morning before our scheduled 8am breakfast and strolled over to Cafe 222. 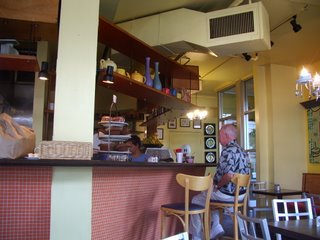 The restaurant wasn’t crowded given that it had just opened so I didn’t feel too guilty taking up an entire table of four. It was just me. :) The dining area and kitchen sort of blend into one, with a small bar counter between. It was cozy and colorful, the type of place where you would meet a longtime friend for your “every Saturday” breakfast. 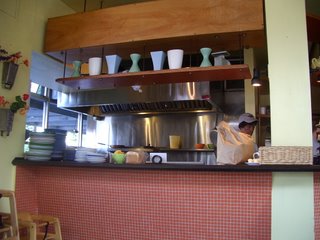 I had my heart all set on the pumpkin waffles until I saw the orange pecan pancakes on the table to the right and a man in the corner devouring a large plate of peanut butter and banana stuffed french toast. Why are making decisions so hard? I would have preferred to order a plate of each, but my wallet forbid me to do so. Thank god, otherwise, I would have finished everything. I’m so bad at wasting food. Someone once told me (or maybe I read it somewhere…) “Better a burst stomach than wasted food.” I don’t want to say I fully support of the quote, but I’ll admit it perfectly defines my actions. 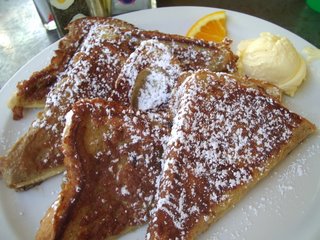 I ended up selecting the French Toast. How did I end up picking the most simple item among offerings of tamales & eggs, peanut butter and banana stuffed this and that, sweet cornbread waffle and eggs italia? Well what usually happens is that I become overwhelmed with alll the options and I’m just like, “Bah!” eat the simplest thing. And I love french toast. So I made the right choice (I think…gah. So many “I thinks” in this world. Fine. “I Know!” The toast was dipped in your regular egg batter spiced with orange zest and grand marnier. What made me happiest was that there were 6 halves (!) instead of the usual 4 that come with an order. Note to restaurants in Hawaii: 4 halves are not filling for brunch. On the side was a scoop of butter and a squeeze bottle of maple syrup. The bread was not thick as it should be for really good french toast, but it’s hard to turn my nose up at any sort of fried starch. Sweet, hot and eggy with a generous dusting of powdered sugar, the butter and syrup effortlessly melted right in, offering me soft bites of deliciously buttery morning sin :)

The clock struck 8:00 am before I knew it, and I had to dash back and change into business attire for the morning conference breakfast. The french toast there couldn’t even compare.