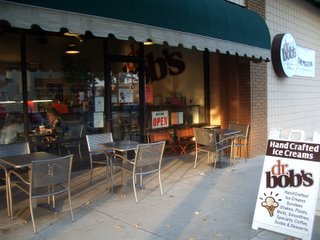 I’ve seen Dr. Bob’s ice cream on the shelves of many gourmet markets but had no idea their central retail location was located just 10 minutes from Claremont! Apparently, it’s a rather famous ice cream shop having been featured numerous magazines and TV shows. 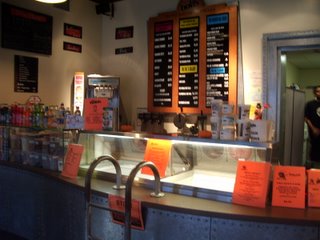 It’s funny how this shop, so widely known, is located in the middle of NOWHERE. For real. There was practically nothing by the shop aside from the desert wasteland of the Inland Empire. My friend and I were driving in circles for a while trying to figure out where it was, only to realize it was the empty shop on the back corner of a building. It’s a little oasis! 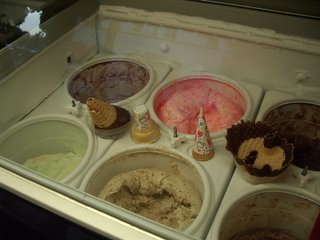 Once inside the shop, we were greated by colorful paintings, menus and signs. With just one guy working and with no one else here on a Saturday afternoon, he was more than eager to give us samples galore! I was in sheer heaven with a little bites of Brown Sugar Pecan, Vanilla Peanut Butter Chunk and Scharffen Berger Dark Chocolate. 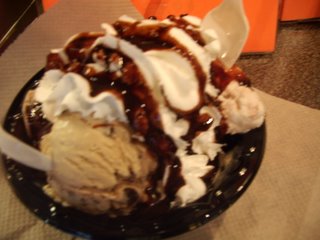 My friend had a really bad sweet tooth and went for the “Chocolate Bomb”: a warm brownie with a scoop of mud pie, a scoop of strawberry, sour cream and brown sugar, a ton of whipped cream and a good dose of hot fudge ($4.50). I had a bite, a very intense bite – the brownie was very cake-like with a rich chocolate flavor. The warmth of the brownie melted the mud pie just to the point where the flavor of the ice cream was best revealed. It was a very dark chocolate that just tettered on the border of being bitter in flavor. Mmm 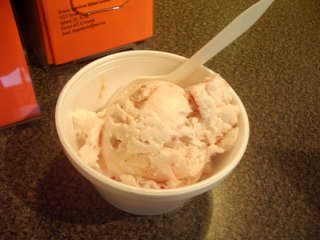 I had a single scoop of the strawberry, sour cream and brown sugar ice cream ($2.25). The sour cream was a wondeful component, it gave the ice cream a smooth, full bodied, buttery rich texture. I couldn’t taste the “brown sugar” element until it melted a bit (I like my ice cream on the softer side), but it definitely came through as a nice afterthought…”mmm…what was that? Oh yes, oh yes…brown sugar!” I like how Dr. Bob’s ice cream leans to the flavorful side as opposed to sweet. None of the (many) flavors I sampled could be described as sweet or sugary, rather the elements, whether it be maple, chocolate or raspberry was what you tasted. My only complaint is that the ice cream was served too cold, resulting in a “hard” treat that had to melt a bit until you could really experience it at its optimal. However, that’ s something I can overlook – I’ll let it soften on my own, but I’m coming back the next time I have a wicked cocoa craving!