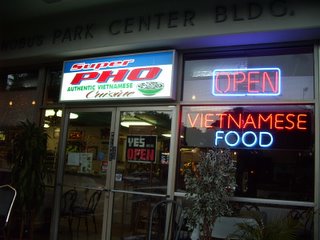 The name “Super Pho” spelled out in big bright letters would naturally lead one to question the quality of food served in this restaurant. But despite it’s tacky name and decor, Super Pho offers surprisingly decent dishes. The restaurant has gone through owner changes in the past couple of years, though the menu and prices (with the exception of a $.50 increase in pho) have stayed consistent. Our family comes here on nights where we are craving a steaming hot bowl of pho but don’t want to drive to Chinatown or pay the high prices at the neighboring Hale Vietnam. Though you can’t see it in the picture there’s Christmas lights hung around the entrance all year long – it’s a definite attention grabber! 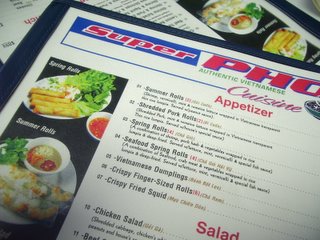 The menu is mainly Vietnamese fare with some local touches here and there. It’s hard to open a casual restaurant in the Kaimuki neighborhood without acknowledging the local palate. In addition to the traditional Pho and Bi Cuon, you can also get dishes akin to stir frys and fried rice found at chop suey places. The food is Vietnamese for sure, but there’s a subtle local element (as well as shortcuts taken) to most dishes making it less authentic than we would like. 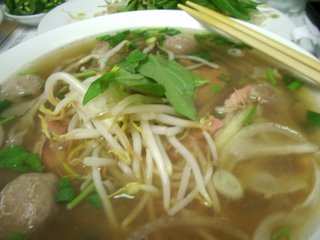 I always leave satisfied, though that may be due to the fact that my expectations are not set at a level as high as they would be if I went to Huong Lan or another spot in Chinatown. I just love that snuggly warm feeling I get everytime a big bowl of pho is set in front of me. Steam rising out of the bowl, the pleasing mix of vibrantly colors herbs and soothingly soft white noodles and a simple, clear soup, how could anyone not like pho? I suppose pho is my comfort food the way chicken noodle soup or grilled cheese sandwiches are to others. The pho broth here is beefy enough, though one may suspect that msg or other “unnatural” pho flavorings play a key role. They are slightly stingy on the bean sprouts and basil and even leave out the ngo gai on some occasions. I guess I would rather have no ngo gai than old, discolored ngo gai (I’ll refrain from mentioning the names of these restaurant which have sent out bad veggies for hope that it was just a fluke!) One thing you can’t complain about though, is the massive amount of noodles they give you. It’s seemingly bottomless bowl.

Service is basic and friendly – owners have changed but the same waitress has been there for quite a while (she must know what she’s doing). Food comes in a timely manner and always at the perfect temperature. This quiet neighborhood stop is good for a low key family dinner, like Zippy’s, only Vietnamese!