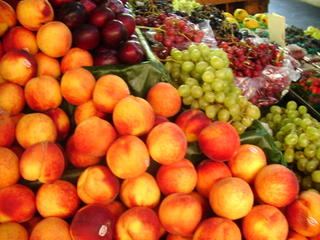 Now isn’t that just beautiful? I made a trip down to the LA Farmer’s Market on the corner of 3rd and Fairfax in Beverly Hills yesterday. The Market’s famous marketing slogan is, “Meet Me at 3rd & Fairfax.” Cliche or cute? I don’t know, but I do like market! A friend of mine told me it was near downtown LA so after dim sum, my aunt and uncle agreed to go to the market. I felt so awful when we got there because: 1) It was NO WHERE NEAR downtown 2) It was impossible to find parking 3) We were given wrong directions 4) I think we wasted a whole tank of gas getting there. I couldn’t even enjoy the market as I felt so guilty for asking them to go there in the first place. To top it off, my camera died after a couple of shots and the pumpkin ice cream from Bennett’s Ice Cream was pretty awful. 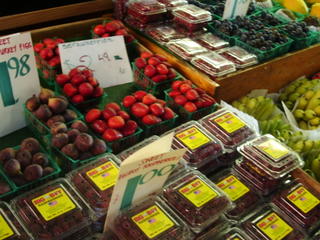 Nonetheless, I managed to get some shots of the produce avaliable. Surprisingly, the FARMER’S market consisted only a 5-6 produce stands. The market is more of a place to do some shopping, have lunch at one of the many outdoor cafe-esque restaurants than a place for hunting out real produce. Many of the food shops were doing brisk business. The Gumbo Pot was very crowded with people waiting in line for their Po’boys, Gumbo Ya Ya and the some pretty tempting looking beignets. At The Village an elder man was making open faced rectangular pizza sandwiches, one of which he topped with a couple of raw eggs and plenty of cheese before sticking in the oven. There were many bakeries boasting challah, strudels and fragrant pumpkin bread. 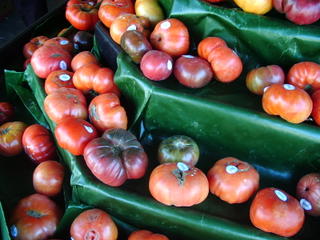 Mmm. Heirloom tomatoes! They look a bit like pumpkins, no? 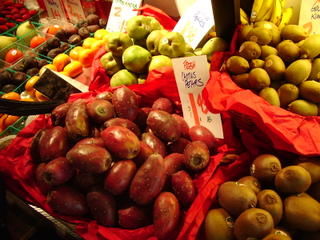 I believe these were called cactus pears. Imagine a short fat eggplant with pokey, durian like spines and you’ll get the idea. They looked pretty intriguing and I probably would have bought some if I didn’t feel like crap for making my aunt and uncle waste their entire day getting there. 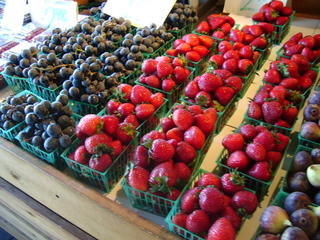 The concord grapes, strawberries and figs were layed out in rows and rows in every fruit stall. I especially loved the strawberries, smaller than the ones at the supermarket they were such a luscious shade of red and so perfect looking in every detail. I would like to go back to the market another day (this time I’ll plan things out more in advance!) and eat at the different food stalls. There’s a Whole Foods across the street, but the fruit there is nearly twice as much as what you would pay at the market. With many restaurants to pick from, a handful of specialty food stores, butchers and fresh produce, the LA Farmer’s Market a fun place to spend the day – just make sure you allow enough time to browse/eat/shop/eat some more and come early before it get’s really hot!