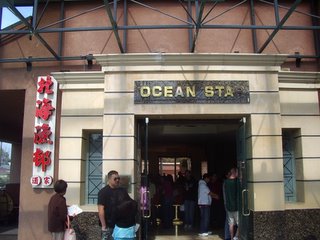 Went for yum cha at Ocean Star last weekend. Sheesh. Yum Cha in LA is an adventure you need to set at least two hours aside for. Lucky for us, we didn’t wait long for a table, but crowds quickly grew after we were seated. 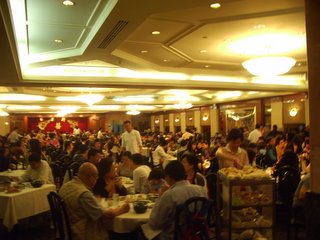 Ocean Star is a traditional dim sum restaurant – high ceilings, rolling carts, waitresses calling out names of dishes in Cantonese and Mandarin, large and small families alike dining, and on occasion, even competing for food. It’s all in the good spirit of yum cha-ing (it’s a verb!) 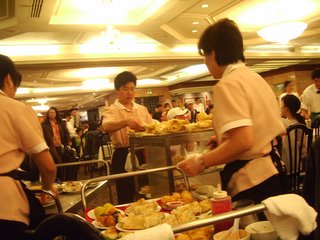 I find that while LA yum cha has significantly more varieties to offer, the quality rarely beats what we get in Hawaii. Not that the quality here isn’t good, it just seems so massed produced (or maybe I’m just overwhelmed by the crowds). Either way, yum cha is one my favorite ways to dine. I love how the eating and ordering are incorporated into a massively strategic and delicious game. You gotta judge when that plate of hot dan tat comes out – can my stomach handle one more? And you have to run over to that cart with the freshly steamed baos, lest you get the bottom basket, soggy with condensation. Wu gok is only good hot out of the deep fryer, doubtlessly worth the fight for the first plate. 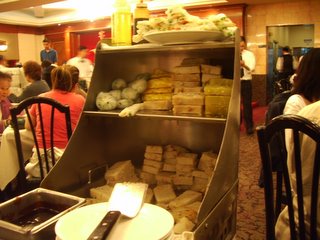 It’s always fun to watch them fry the turnip cakes, though I was slightly horrified by the amount of oil that went into frying these babies. They turned out rather greasy and limp, like I was eating solidified oily mush with the occasional bit of shrimp. I missed the crispy crust that marks a well cooked cake. 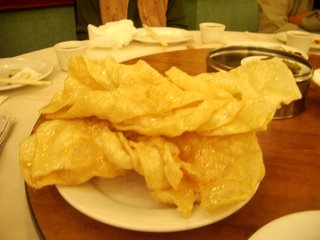 Don’t know what this is called, but I refer to it as the deep fried bow drenched in sugar syrup. As we were seated near the kitchen, my aunt spotted it right as soon as it came out. My uncle was given the task of picking the “best” one – big and billowy. The sticky syrup nicely complemented the pastry, still hot enough to turn the tips of your finger slightly red upon picking them up. This is a hit or miss sweet. On bad days, the pastry doesn’t quite “blow up” when fried and sticks tightly together. But today, oooh, light and hot, melt in your mouth, crunchy sweet goodness. 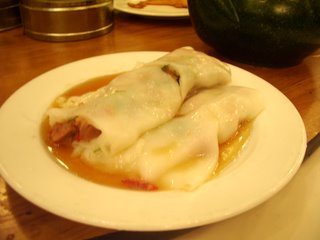 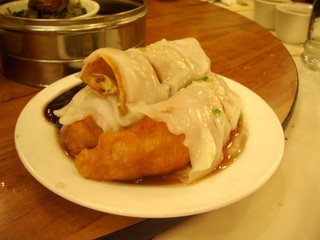 You Tiao cheong fun was another disappointment. This isn’t offered in most Hawaii restaurants so it’s something I try to order when I go yum cha on the mainland. The you tiao was heavy and chewy, not to mention cold. The soft and slippery noodles were the only saving factor – though if a yum cha restaurant can’t do cheong fun noodles right what can you depend on them for? 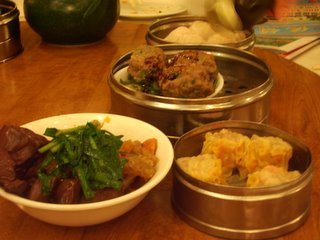 Steamed meatballs, siu mai and a mixed bowl of blood cubes, intestines and tripe. I enjoy meatballs in general, Italian or Chinese! Balanced between salty and sweet, Ocean Star’s version was placed high on my list of plump, chewy meatballs. It came with a thick soy based sauce which I secretly spooned up a bit to drink when no one was looking (hehe…I love salty food!) Siu mai was cold for sitting out in the open for too long and the skin was somewhat dried out. The tripe was my favorite in the bowl, hot and savory, it surrendered only to an enthusiastic bite. 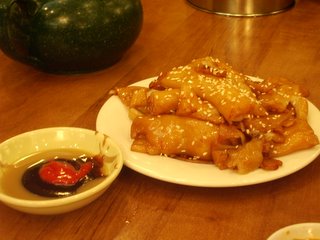 Shoyu pan fried sesame cheong fun with hoisin and mustard sauce on the side was just as expected. It’s hard to go wrong with this. Again, it was more oily than most restaurants but I don’t complain much about soft savory noodles with hosin. Such comfort food. On occasion, we have this dish with a bowl of plain jook at home for lazy weekday breakfasts. 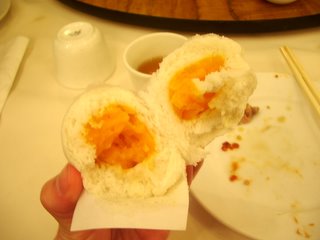 Don’t do it. Just don’t get the steamed nai won baos here. Once you’ve had them at Tai Pan back home, you’ll be spoiled and never satisfied with anything else. The custard in the bao (which, by the way was dense and heavy) was a thick tasteless yellow glob of cholesterol. It was so undelicious I couldn’t bring myself to finish one bao (considering the fact that I hate wasting food and usually finish at least an order of nai won baos on my own). Bad baos make me mad. 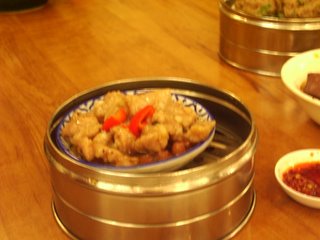 Uh oh, forgot the name of this one. We’ll call it meat on bones with peanuts. A definite on the “should order again” list. The small tender chunks of shoyu stewed pork on the bone were at once savory and just a tad bit sweet. At the bottom of the dish were peanuts cooked soft in the same manner. 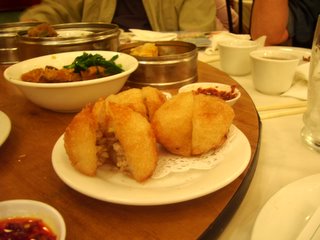 The ham sui gok was the best item we had here. Burning hot, each bite gushed with steaming sweet pork on a savory crisp and chewy mochi like skin. If I even learn how to make these properly I’d eat them day and night. Ham sui gok reminds me of another dim sum favorite, the wu gok, a mass of pounded taro encasing a similar chopped pork filling, rolled in a Chinese version of tempura batter and deep fried. I never understood how they managed to get them so perfectly formed and puffy (Tai Pan serves excellent wu gok). I bow down to yum cha chefs – such geniuses. Mmm. Deep fried dim sum. Yup, that’s the way to go.

Unfortunately Ocean Star doesn’t have my all time favorite, the steamed gum sa bao. I’ve ranted on long enough about the beauty of a successful gum sa ba in one of my first posts so I won’t continue with that again. Foodwise, I was underwhelmed by Ocean Star, but wouldn’t mind coming back with a big group of friends just for the atmosphere. It’s loud, noisy, competitive (isn’t this what makes dining fun in some cases?) and relatively “hao chi!”